This is looking AWESOME!

The guitar cabinet is almost done - just another coat or two of finish and it's good to go. I'll leave the detail pictures for the final post (once I have it home and full of guitars), but here are a couple to show what we've been up to.

First, here is a shot of the laminated ash yoke holders ("hangers" or "hockey sticks") after their second coat of varnish. I really like how they came out, and if they end up being stiff enough, I may not even need retaining rings on the yokes. Oh yeah, that's a boat in behind there... remember the boat? I'll be back working on the boat next week. 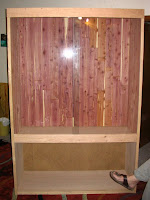 The second shot (taken a couple of days earlier) shows the major pieces assembled (sides, base, shelf, top, and doors). After testing the doors and installing the cedar on the top of the shelf, we took the whole thing apart for light installation, hole filling, and a couple other small jobs. Then it was final sanding and first coat of varnish, which is now on.

I'm hoping Dad will throw another coat of varnish on this puppy - it might be the last one, or I might have to put one more on later. Either way, I should have it home and full of guitars by next weekend. W00T!
Posted by Courtney & Tara at 8:46 a.m. No comments:

So I understand that wooden boat builders (and maybe woodworkers in general) have this concept known as the "Moaning Chair". It's where you sit and contemplate your latest really serious screw-up. Sooner or later everyone gets their turn, and mine was today.

See, the top of the cabinet and the shelf across the middle (which forms the bottom of the actual humidifier and guitar display portion) each have a 2x4 running across the front. This provides stiffness and room for lighting and space for the glass doors to run in. The three cross-pieces (the base, the shelf, and the top) were all carefully cut to 54" wide, that being my determination of the optimal width in which to hang eight guitars without having them too close together or making the cabinet really huge. I mean, I still need space for bookshelves on either side, right? (To say nothing of the mini-bar.)

Now, it wasn't the end of the world; we hadn't assembled the shelf or the top. It was a pretty simple matter to trim the other pieces accordingly, and we were back on track in half an hour or so. I've lost around an eighth of an inch between guitars, which isn't great but should still be OK. Mostly, it's my pride that was injured.

HOWEVER! The rest of the day went well, and we got the shelf and top assembled. Yes, the lengths are all correct now, thank you for asking. We then drilled all the holes for the quick-connect system. There are a lot of them, 72 to be exact, and we got all but one in the right place. I blame Dad, he had the drill and he's not here to dispute whether it was my marking of the hole or his placing of the drill... 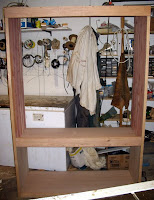 Anyway, holes all drilled, we dry-assembled the sides, base, shelf, and top, and by Crom it actually went together! I offer you pictures as proof. It's actually looking like it should. Er, maybe an inch or so narrower than planned.

Somewhere in there we also started laminating the curved hangers that will suspend the yokes (these fit snugly around the neck of each instrument where it swells out to form the headstock) directly below a bolt in a T-track along the inside top. All eight should be laminated by the end of the week.

Next we attach the back, finish the cedar lining, test the doors (which I pick up from the glass place tomorrow), and then disassemble the whole thing for finishing.
Posted by Courtney & Tara at 7:55 p.m. 1 comment: 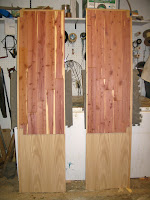 A few hours into the guitar cabinet, the sides are assembled and pretty much ready to finish. Here are a couple of views: on the left you can see an inside view of the sides, complete with aromatic cedar lining (it's gonna smell goooooood!).

The front side of the side (if you know what I'm saying) is on the outside of each piece in this photo, so if you rotated the outer edge 90 degrees toward you and the sides faced each other, you'd be looking at the front of the cabinet. The cutouts are for oak 2x4s that will hold the doors and strengthen the shelf and the top.

Oh, and the ugly grey stuff is foam mat, which is easier on the feet than a concrete shop floor. Used as illustrated it doesn't do as much for one's feet, but has the virtue of protecting the outer ply of precious oak veneer, which looks good, but is only slightly thicker than, say, cling-wrap. 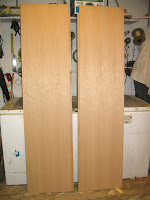 The second picture shows the outside of the sides; you can just make out the reinforcement/front edge strip of oak along the inside edges (which are the front edges once assembled, blah blah blah).

Courtney here with a quick note: the next couple of weeks will be devoted to a side project, which I will try to document with a few pictures. I've somehow accumulated a fair number of guitars and similar instruments, all of which really should be protected from extreme humidity or lack thereof (Winnipeg winters are very cold, which means our heated dwellings become very dry in winter). I've decided to build a big display cabinet to house, show off, and humidify my instruments.

The basic plan is a cabinet about 55" wide by 20" deep by 79" tall, with a compartment for case storage below the main compartment for display and humidification. The upper compartment will feature sliding glass doors, a lining of aromatic cedar, and eight custom laminated hanging yokes (to suspend the instruments from their pegheads) which slide in a track. It's also got lighting and a hygrometer, and the whole thing will be assembled with 1/4-20 quick connect hardware to facilitate moving.

I'm still trying to figure out how to work in a hot tub and a pony, but squeezing in a mini-bar seems like an insignificant challenge. Photos soon.
Posted by Courtney & Tara at 8:22 a.m. 2 comments: 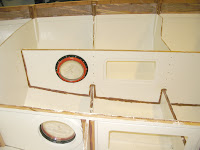 ...including trips to New Hampshire and BC. Back at work and back to work on the boat. Seat sides are installed, framed, and filleted on the inboard side. The fillets look a bit messy because we're not going to sand and paint until the inboard side is filleted too, which in turn is going to wait until we have more epoxy mixed up for the companionway lockers. 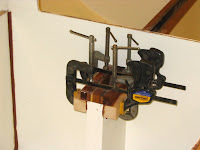 The second photo shows the beginning of the framing around the tops of the companionway lockers (they're small things on either side of the CP case). Inside the framing is a raised bit (I'm thinking it's called a coaming but I'm probably wrong) over which the locker hatches (lids) fit, with the raised bit keeping water out of the locker itself.

Man, that doesn't make much sense. Oh well, watch for more pictures.
Posted by Courtney & Tara at 2:39 p.m. No comments: 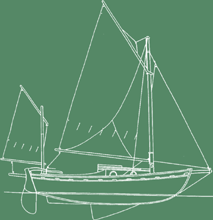 Who's building this thing?

Courtney & Tara
Winnipeg, Manitoba, Canada
Courtney is a senior administrator for a non-profit agency serving adults with intellectual disabilities. Tara is renovating her cottage. Aside from boats, they like making and listening to music, cooking and eating good food, travel (especially to gigs!), and reading.

But what's her NAME?

Some of you might have heard what we plan to name this boat, but we've decided not to make that information public until she has a proper dedication and launching ceremony. In the meantime, we welcome name suggestions. You might not change our minds, but it should be entertaining, so feel free to leave a comment with your suggestion!